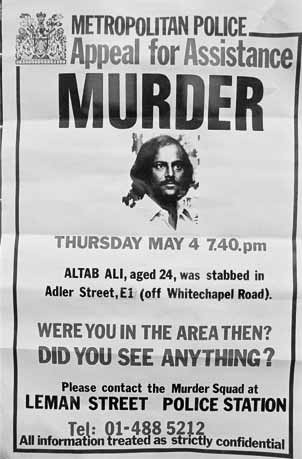 By julie78617th May 2018Current Events
No Comments

1-Day Symposium at the LSE (including Keynote by Professor Anoop Nayak, University of Newcastle)

In May 1978 a young Bangladeshi man, Altab Ali, a textile factory worker in Whitechapel, was murdered on his way home. His murder was the catalyst for major anti-racist mobilisations amongst the Bengali community and others in the East End of London. The East End of London has of course long represented a place of arrival for new migrants in the city and has necessarily been a site of struggle against racist violence, ranging from the Battle of Cable Street to the more recent acid attacks on Resham Khan and Jameel Muhktar in 2017.  We have also seen the violent impact of gentrification in these areas, representing social and ethnic cleansing.

On Wednesday 6 June 2018 we are holding a day-long symposium at the London School of Economics and Political Science to which you are cordially invited to contribute. This symposium will be an opportunity to bring together academics, activists, artists and archivists to reflect on the murder of Altab Ali. We will mark this anniversary while drawing connections to contemporary questions surrounding racism, anti-racism, violence, and urban life. We aim to explore racial violence in the city, anti-racist mobilisations, policing and housing dispossession from historical and contemporary perspectives.

The first part of the symposium will explore the wider context of 1978 looking at issues such as housing and squatting, policing and anti-racist mobilisations both in the East End and elsewhere in London. It will consider how Ali’s murder fits within a longer trajectory of racist violence in the city, a violence built into the very fabric of urban life. The second part of the symposium will reflect on the current situation, broadening our focus outwards from London and exploring issues of gentrification, racist violence, as well as the hostile environment of Go Home vans, everyday bordering and post-Brexit violence.

In the evening there will be a keynote address on the themes of the symposium by Professor Anoop Nayak, Professor of Social and Cultural Geography at the University of Newcastle.