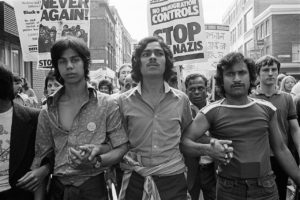 Four Corners and partner Swadhinata Trust are delighted to announce a major new project
which has received a National Lottery Heritage Fund grant of £82,400. Thanks to National
Lottery players, Brick Lane 1978: The Turning Point will share the stories of the local
community of London, Brick Lane, during a pivotal year in race relations. Here the largely
Bengali community mobilised in an unprecedented, anti-racist uprising against far-right
groups, following the murder of Altab Ali, a 25-year-old Bangladeshi garments worker. Their
actions represented a turning point in local and national resistance against racial harassment
and discrimination.

The project will explore how and why this watershed moment unfolded. 18 volunteers will
work with an extensive collection of archive images by photographer Paul Trevor, using them
as a powerful catalyst to research, identify and gather oral history accounts from those
involved at the time. The aim is to create a lasting, first-hand record of local peoples’
memories, and to make Paul Trevor’s historically significant photographs publicly accessible.
The project runs over two years from Summer 2019, with the launch of a public programme
of exhibition, talks and study days at Four Corners’ Gallery in Spring 2021.

Ansar Ullah, Director of Swadhinata Trust said: “This year is the 41st anniversary of Altab Ali’s
killing. It is important to capture and document that period before it’s too late. It is the most
important aspect of the Bengali community’s history in the UK. To capture that struggle with
those who were there physically and in images is very exciting.”

Paul Trevor said: “They say a photo is worth a thousand words. But sometimes, as in
this case, words are essential. This project is an opportunity to add the voices of those
who made history to the images of that story.”

Carla Mitchell, Development Director at Four Corners said: “This history is hugely relevant
today, with an increase of racist attacks making the headlines in 2019. Thanks to National
Lottery players we will be able to ensure that this powerful heritage is made publicly
accessible for a wide audience of current & future generations.”

Stuart Hobley, Area Director, London & South at The National Lottery Heritage Fund said:
“The history of community activism and anti-racism of Brick Lane 1978 has played a
significant role in shaping the culture and heritage of London. We’re delighted that, thanks to
National Lottery players, we can support Four Corners to explore and record this crucial part
of the local community’s heritage, acknowledging its impact on the city and promoting better
understanding in the wider community.”

The project will explore the heritage of the Brick Lane community uprising of 1978 through
three main elements:

1. 30-40 oral histories recordings, undertaken by volunteers, and the creation of a short
film of interviews;
2. Creation of a schools learning pack, to be distributed to local secondary schools;
3. Touring exhibition & booklet, launching in Spring 2021 at Four Corners Gallery and
touring to two other local venues, with associated public talks and study days. paul trevor photo 1978

All project material will be lodged at the Bishopsgate Institute archives where it will be publicly
and freely accessible. Project information and images will also be added to both Swadhinata
Trust’s and Four Corners’ websites. The project will work closely with the Altab Ali
Foundation, Tower Hamlets Arts, Parks and Events and the Bishopsgate Institute.

Four Corners is a creative centre for film and photography, committed to promoting
https://www.fourcornersarchive.org/archive/view/0000014
Swadhinata Trust

The Swadhinata Trust is a London based secular Bengali community group that works
to promote Bengali history and heritage amongst young people. The organisation has
been operating since November 2000, offering seminars, workshops, exhibitions and
educational literature to young Bengali people in schools, colleges, youth clubs and
community centres in the United Kingdom. www.swadhinatatrust.org

About The National Lottery Heritage Fund
Using money raised by the National Lottery, we Inspire, lead and resource the UK’s heritage
to create positive and lasting change for people and communities, now and in the future.
www.heritagefund.org.uk.
Follow @HeritageFundUK on Twitter, Facebook and Instagram and use
#NationalLotteryHeritageFund